The Reserve Bank of Australia (RBA) Board meets for its final policy meeting of 2019 in Sydney today, with the decision statement from Governor Philip Lowe due at 2:30PM AEDT. At today's meeting, the Board is expected to keep the cash rate unchanged at 0.75% as waits to assess the impact of the three earlier rate cuts it delivered in June, July and October. 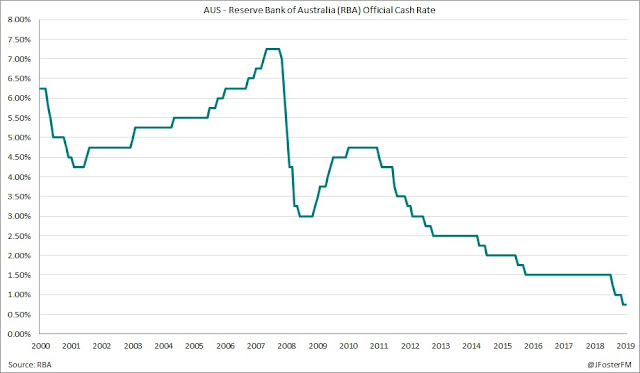 At the previous meeting in November, the minutes outlined that the Board considered there to be a case for announcing a 25 basis point rate cut, however; it made the decision to remain on hold on the basis that more time was needed to allow the earlier rate cuts to work their way through the economy before it could reach a complete assessment of conditions. This is a very similar tact to that recently taken by other major central banks offshore following an earlier easing in their monetary policy stances in 2019.

Looking back over the inter-meeting period, the key developments have been;


While the soft domestic labour market data are likely to reaffirm to the Board that the case for a further easing in the cash rate could be made, expect there to be no change today. Instead, the more likely approach from the Board will be to wait on tomorrow's Q3 GDP data and reassess the overall situation next year at its February meeting. By then, it will hope to have a clearer insight into global developments and how the domestic economy has responded to interest rate cuts and tax relief. This approach would keep it in line with the wait-and-see stance taken by other central banks offshore, while still retaining an easing bias. For reference, markets are pricing in only around a 10% chance of a 25 basis point rate cut today.
Posted by James Foster at 1:52 PM