The last of the partial indicators in the lead-up to tomorrow's Q3 National Accounts were released by the ABS this morning, which showed that net exports and public demand will contribute to GDP growth in the quarter.

Balance of Payments - Government Finance  — Q3 | By the numbers 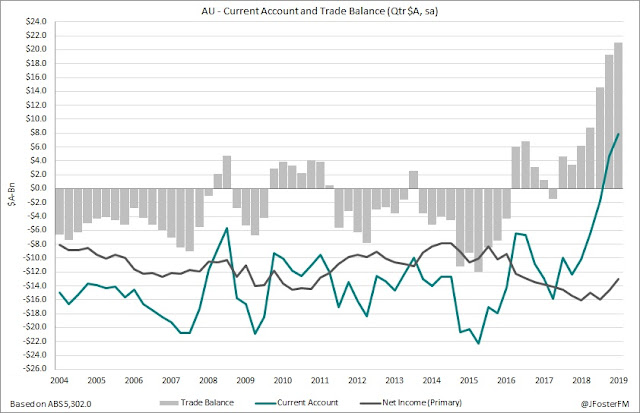 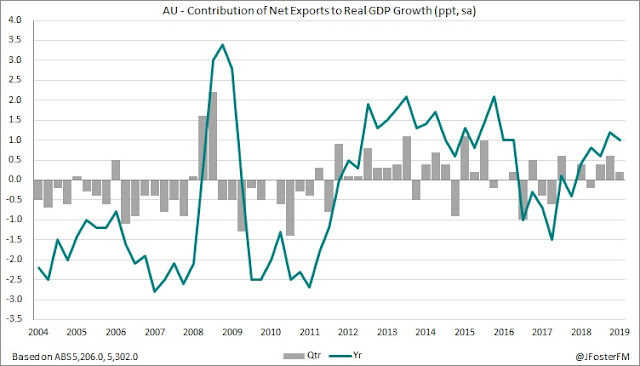 The boost in the trade surplus was driven by a 2.1% rise in export earnings, which was led by the volatile non-monetary gold category (+51.2%) and services (+2.0%), though non-rural goods were soft (-0.1%) and rural goods (-3.1%) continued to be impacted by drought conditions. For imports, the total bill was up by 0.8% in the quarter, on increases from consumption goods, intermediate goods, non-monetary gold and services, though capital goods were weak (-4.3%). The ABS estimates that the terms of trade were broadly flat over Q3 (+0.4%) but are still up by around a healthy 8% over the year. In volume terms, exports increased by 0.7% in Q3 to be 3.3% higher over the year. On the import side, volumes fell for the 5th straight quarter (-0.2%) and were down by 1.5% over the year, reflective of a lower Australian dollar and weak domestic demand conditions. In Q3, net exports are expected to add 0.2ppt to activity. 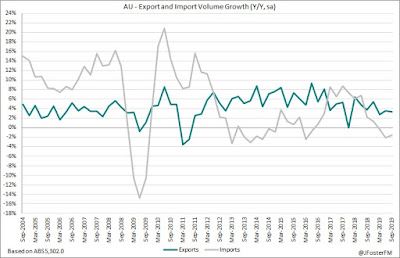 In a similar dynamic to the June quarter, GDP growth in Q3 will be supported by net exports and public demand. This comes at a time of slow growth in household consumption, soft business investment and weakness in residential construction. Overall, GDP growth in Q3 appears to have risen by around 0.6% and 1.8% over the year, which if confirmed in tomorrow's National Accounts would be an improvement from an annual growth rate of 1.4% in Q2.
Posted by James Foster at 6:48 PM