The near two-year-long downturn in Australian house prices came to an end in the September quarter according to the ABS's Residential Property Price Indexes data, as the combined impacts of RBA rate cuts, an easing in macroprudential policy and the passage of May's federal election played through the established housing market. The weighted-average of capital city prices lifted by 2.4% in the September quarter — its first quarterly rise since Q4 2017 — as the decline in through the year terms moderated to its slowest pace in 12 months at -3.7%. From peak to trough, on average, capital city house prices on a national basis fell by 8.0% between mid-2017 and mid-2019. 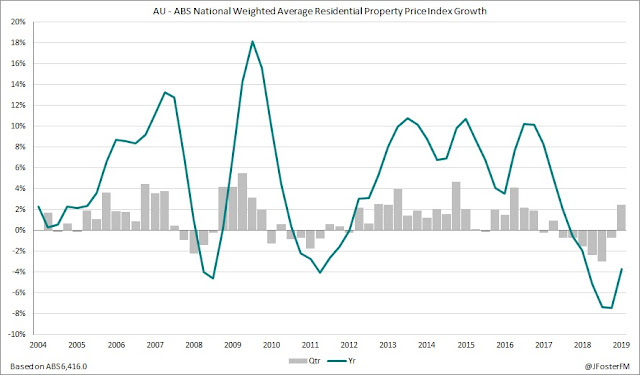 The Sydney and Melbourne markets have led the recovery, each rising by 3.6% in Q3 supported by both the house and unit segments. Hobart prices added a further 1.3% in the quarter, while the Brisbane market saw prices lift (0.7%) for the first time in a year. Elsewhere, prices continued to fall and as a result the annual declines in Adelaide (-1.0%), Perth (-4.6%), Darwin (-5.4%) and Canberra (-1.4%) steepened a little. 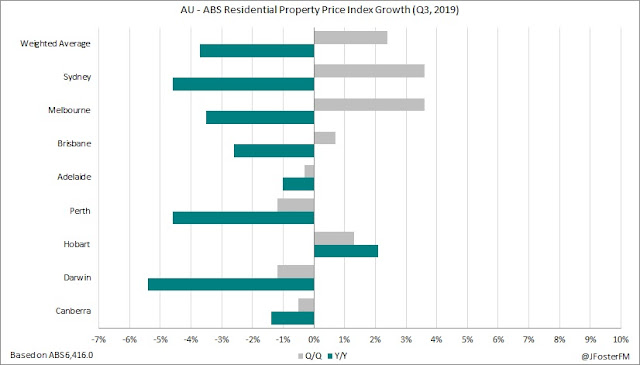 The granular breakdown of price changes across capital cities and segments for Q3 and over the past year is shown in the table, below.

With prices rising in the quarter, the total value of Australia's residential dwelling stock increased by 2.8% in Q3 to $6.869tn, as annual growth (0.1%) turned positive for the first time in a year. 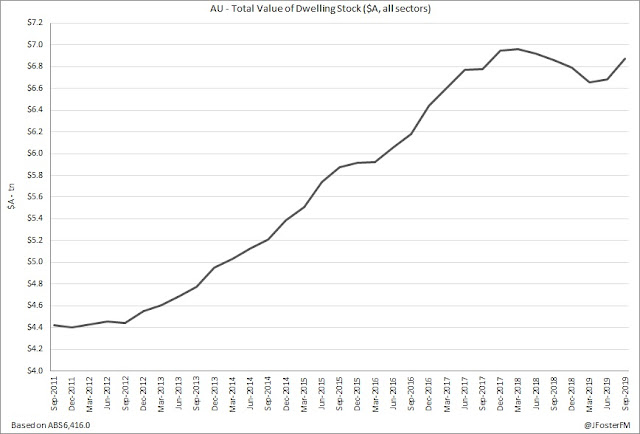 The ABS's series lags the more timely monthly updates on Australian property prices compiled by CoreLogic. Last week, CoreLogic reported that capital city prices increased by 2.0% in November, which followed a 1.4% rise in October, to be up by 0.4% over the year.
Posted by James Foster at 7:18 PM