The outlook for domestic monetary policy was the key focus this week following a speech by the RBA Governor Philip Lowe at the Australian Business Economists Dinner in Sydney. The speech was titled "Unconventional Monetary Policy: Some Lessons From Overseas" and, by way of background, drew upon the findings of a recent report released by the Committee on the Global Financial System, of which Governor Lowe is the Chair, at the Bank for International Settlements. The report examined the efficacy of central banks' use of unconventional policy tools in the post-GFC period.

Governor Lowe discussed four unconventional policy tools; negative interest rates, extended liquidity operations, asset purchases or quantitative easing (QE), and forward guidance. The overarching observations were that liquidity operations were particularly effective in addressing dysfunction in markets and ensuring the real economy did not suffer from a constrained credit supply, though the effectiveness of the other tools was viewed as less compelling, in part due to negative side-effects that can be associated with those options. As such, the lesson was that as conventional monetary policy runs out of steam "a package of measures works best, with clear communication that enhances credibility". Tuesday night's speech was certainly consistent with the second part of this lesson.

With the cash rate sitting at 0.75%, Governor Lowe outlined that the RBA is not yet at the point where it is considering implementing unconventional policy tools, however he noted; "Our current thinking is that QE becomes an option to be considered at a cash rate of 0.25 per cent, but not before that". The option of QE would involve the RBA buying government bonds in the secondary market, with the aim of lowering yields across the curve through a purchase and signaling effect, in turn supporting asset prices and keeping interest rates in the real economy low. The hurdle to going down the path of QE is high and is not seen by the governor as a  straightforward transition from cutting rates. As it stands, the RBA is forecasting gradual progress towards its objectives for full employment and inflation within the 2-3% target band, though if the outlook was to deteriorate and suggest those outcomes were unlikely, QE will come onto the Bank's radar. Back in August, Governor Lowe appeared before the House of Representatives' Standing Committee on Economics where the threshold for implementing QE was discussed. In the situation where other central banks around the world were cutting rates towards zero; domestic GDP growth was to remain stuck within the 1% range; the unemployment rate was rising; wages growth stays low; and inflation remains below target, Governor Lowe said "we'll need to look at all monetary options".

In the first instance, however, the Board still has 50bps of rate cuts in reserve, which it is prepared to call on if the domestic labour market or developments from offshore were to deteriorate. On the former, the Deputy Governor of the RBA Guy Debelle discussed in a speech during the week the structural forces that have been at play in driving workforce participation to record-high levels. While this is a positive in and of itself, it has contributed to a prevalence of wages growth outcomes in the 2% range commensurate with the rise in supply of workers. As the Bank has found, that is not a pace consistent with inflation at target and thus further easing in the cash rate remains the most likely course of action.

The data flow this week showed that the downturn in the nation's construction cycle extended to a fifth consecutive quarter after falling by 0.4% in Q3 (reviewed here). The weakness remains centred around residential construction, as new home building by the private sector contracted by a further 3.4% in the quarter to be down by 10.7% over the year. More positively, public infrastructure work appeared to be resuming its uptrend after coming through a soft patch over recent quarters, with activity up by 6.4% in Q3.

Business investment was soft again in Q3 as private sector capital expenditure (capex) fell by 0.2%, with the annual decline steepening to -1.3% (reviewed here). The detail for the quarter was patchy with equipment spending contracting by 3.5% against a 2.7% rise from buildings and structures. Uncertainty offshore and weak domestic demand conditions have appeared to weigh on firms' investment plans for 2019/20 with estimate 4 softer than expected at $116.7bn, which implies only a modest 2.5% increase in capex spending over the year (see chart of the week, below). Three months earlier, firms were projecting capex to rise by around 10% over 2019/20. The downgrade has been driven by the non-mining sector, notably from services firms, with investment now anticipated to fall by 2.8% in the current financial year compared to a projected rise of around 6% three months ago. However, the outlook in the mining sector remains strong with investment forecast to rise by 15.7% in 2019/20 and bring to an end six consecutive years of decline associated with the wind-down from the boom in the early part of the decade. Next week's highlight is the National Accounts for Q3, with GDP growth expected to rise by 0.5% in the quarter and by 1.6% over the year (preview here).

Chart of the week 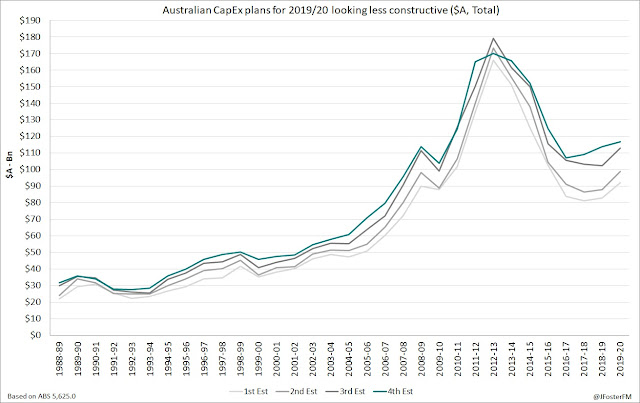 Turning to developments offshore, US President Trump ratified legislation that was passed by the Senate last week that intensifies scrutiny of Hong Kong's autonomy from China. In effect, the legislation provides backing to anti-government protesters in Hong Kong and has led markets to question whether or not it could derail progress on reaching the phase one trade deal between the US and China. Focusing on the US, Federal Reserve Chair Jerome Powell in a speech this week reiterated the message that, after delivering rate cuts at its previous three meetings, the monetary policy stance was now well-calibrated to support a continuation of strong labour market conditions and a sustainable return of inflation to the 2% target.

Weaker global growth and trade uncertainty has slowed the US economy over the past year, and while these remain ongoing risks, growth is holding up and was revised higher this week to a 2.1% annualised pace in Q3 from the initial estimate of 1.9%. The growth engine in the US economy has been consumer spending and the early indications are that it remained solid at the start of Q4 rising in line with estimates by 0.3% in October. However, inflation remains muted with the Fed's preferred measure, the core PCE index, easing from 1.7% to 1.6% over the year. Meanwhile, durable goods orders were more constructive than anticipated rising by 0.6% in October against an expected fall of 0.9%, while orders excluding transportation also lifted by 0.6% on the month (expected 0.1%), but both remain lower over the year at -0.7% and -0.4% respectively, which underscore the weakening impact that economic and trade uncertainty has had on business investment.

In Europe, the EU Parliament approved a new Commission to be led by Germany's Ursula von der Leyen from December 1. The data flow was solid, with the unemployment rate in the 19-nation euro area easing from 7.6% to 7.5% in October to be at its equal-lowest level since July 2008. Headline inflation in the bloc lifted from 0.7% to 1.0% in annual terms to November and was above the consensus forecast for 0.9%, while core inflation also firmed from 1.1% to 1.3% over the year. Lastly, in the UK, PM Boris Johnson appears on track to claim victory in the General Election to be held on December 12, with the closely followed YouGov Poll pointing to a 68-seat majority for the Conservatives. 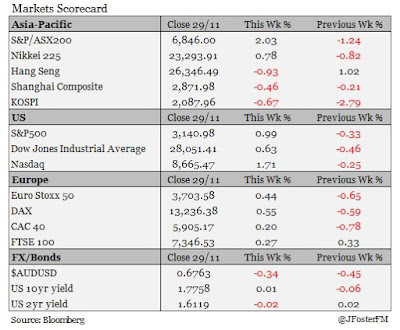